I was at the Educational Computing Organization of Ontario's annual "Bring IT Together" conference in Niagara Falls from November 6-7, 2018. The session that I got the most out of was by my dear friend, Jen Apgar. It was called

and it was fantastic! You can read more about my takeaways on my other blog, http://mondaymollymusings.blogspot.com/2018/11/ecoo-conference-reflections-from-bit18.html

Part of Jen's presentation included a link to a gaming profile survey. The URL to her slides, in case you can't see it on the image, is http://bit.ly/gamersbit18 and the link to the gamer profile survey is http://apps.quanticfoundry.com/lab/gamerprofile/ 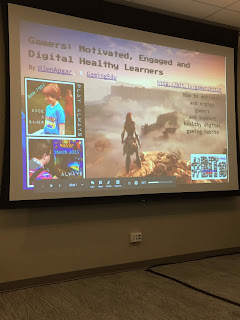 I promised that I would share the gaming profiles of most of my family members and I am keeping my promise. I asked my eldest and youngest to answer the survey questions and provide their results. They kindly complied. This post is dedicated to the awesome Gumby Blockhead, who shared his profile on Twitter.

Here are my family profiles... 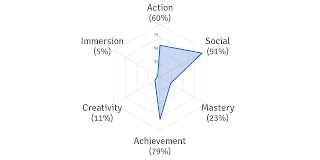 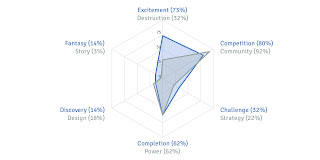 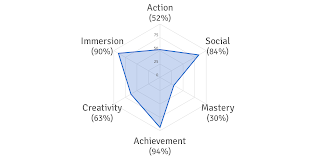 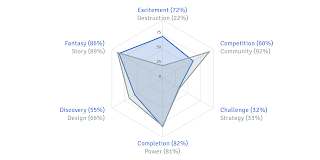 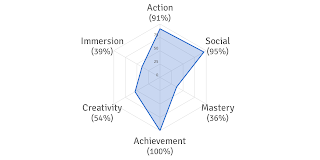 It seems like social and achievements are important to all three of us, whereas immersion matters a lot to the eldest but not to the rest of us. The teens' graphs seem wider / fatter / bigger than mine - is that because for many of my responses, they were lukewarm rather than extreme? I wanted to compare the results a bit easier, so I put the major categories into a chart.

I was also taken with how similar Gumby's profile is to PM's. No wonder they have a lot of fun gaming together!

Posted by MZMollyTL at 12:33 PM No comments:

Catching up on RPG Covers

I haven't posted in over 2 years, but that's not because nothing's happening. (How's that for a double negative?) We've all been playing and gaming and having fun. Here's just some of the most recent comic covers that have been completed by Miss M (who is now 18 years old and in first year university). These were completed August 2017. I'll share the more recent ones later.

It's been a while since I updated this blog with illustrations of my daughter's RPG summaries. Each one is a work of art and I admire the process she undertakes to design them. Here are a couple of "behind the scenes thoughts" for the most recent ones. 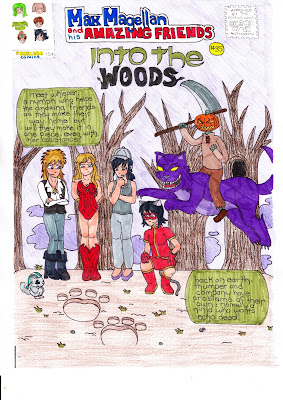 Issue 35 was challenging for the artist to depict a leaping large cat with someone riding it. She also wanted to avoid the "too grey" colour palette so she experimented with purples and violets. 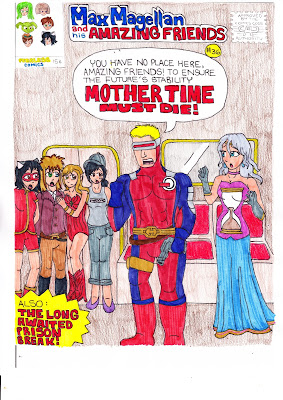 The artist really liked this cover because of its use of a speech bubble for the title of the issue. She had seen this done on real comic covers and wanted to try it. 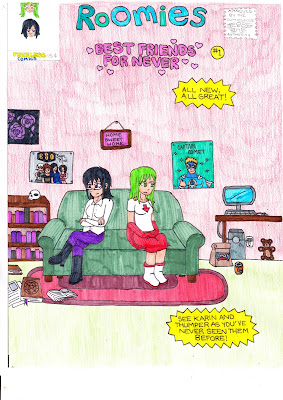 This is another "imaginary" cover for a scenario that never happened. The artist likes how each character has her significant items included on "her side" of the room. 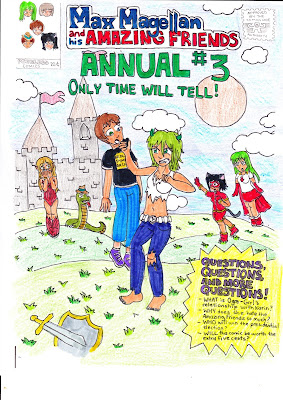 For the first time in a long while, the artist who drew the scene did not do the inking and/or colouring. (I did.) She wrestled with what moment to portray - she was initially going to show the interrogation scene at the police station - but settled with this conflict. 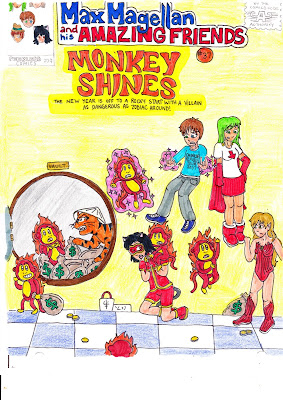 The yellow background was unique, but worked with the Chinese New Year colour scheme to match the plot. Someone else did the inking and colouring for this cover. 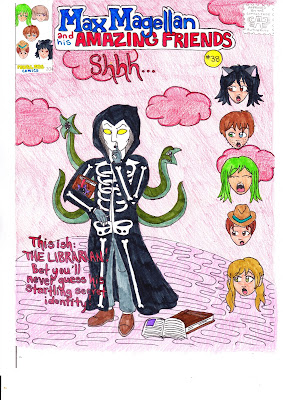 The artist missed doing her own inking and colouring so she did this cover. This was a pretty short adventure but the cover is quite dynamic. The red/pink background was not done previously, and even though she's done "floating heads" covers before, she liked how this one was arranged (note the female/male pattern as well as the compared/contrasted reactions of the characters). The pink floor is a stylized brain.

We're on adventure #42 and I'm looking forward to seeing the new covers!


Posted by MZMollyTL at 6:01 PM No comments:

This study shows (partially) why this blog exists.
Posted by MZMollyTL at 6:18 PM No comments: 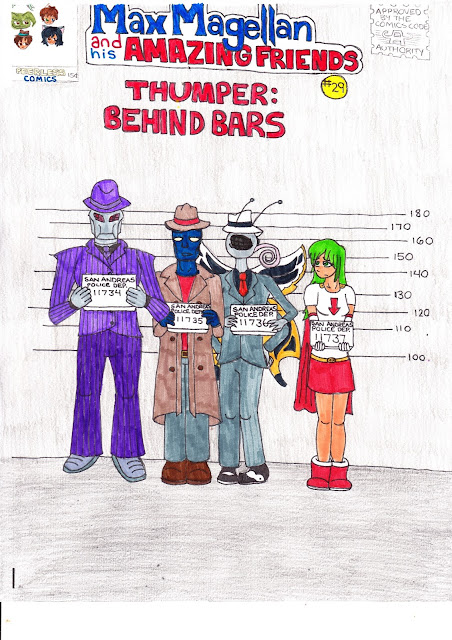 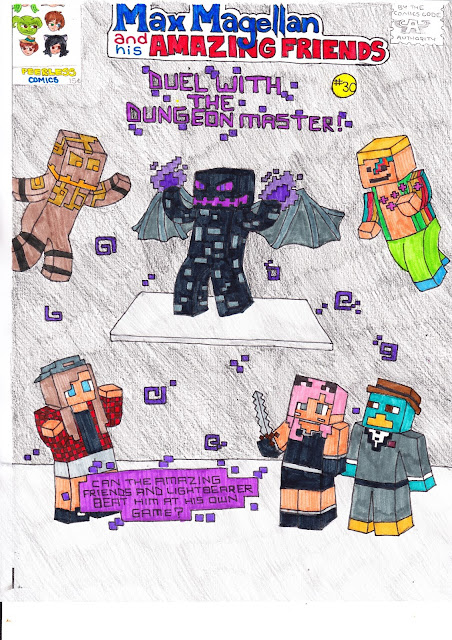 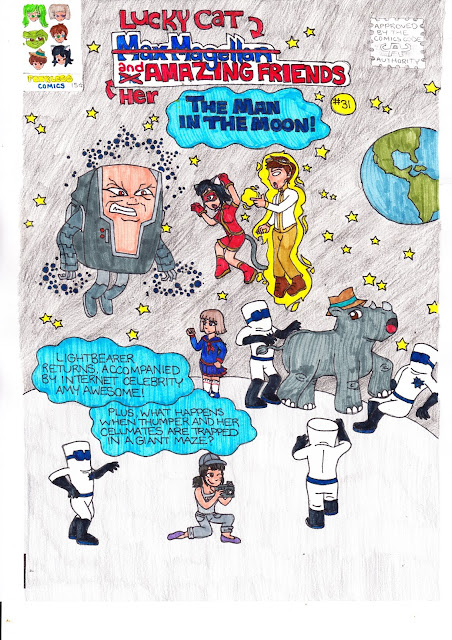 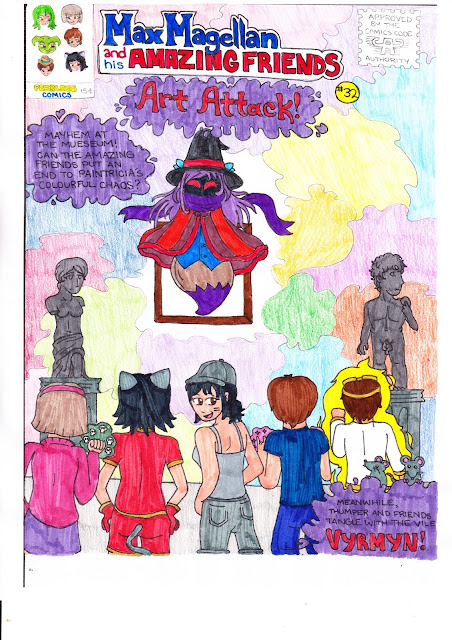 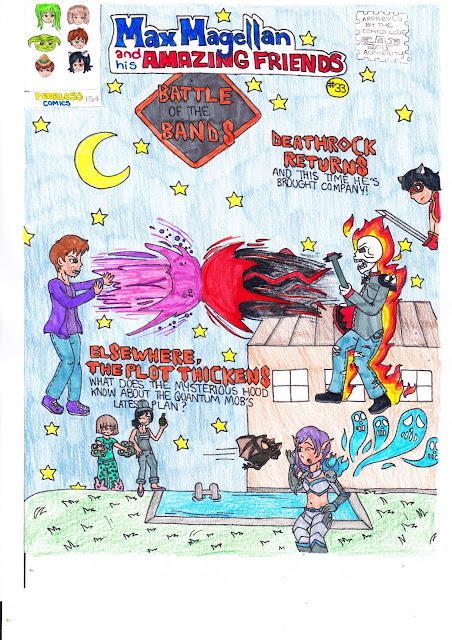 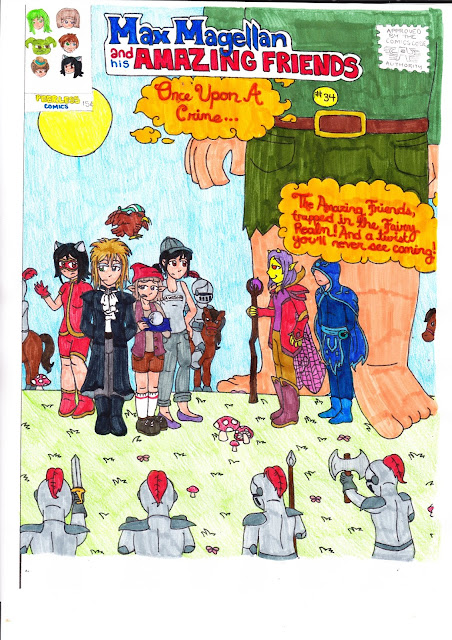 Posted by MZMollyTL at 12:41 PM No comments:

1st time as GM in an RPG

I have my friend Tracey Peer to thank for inspiration for this post.

My family regularly visits the Peer household to play the Marvel Saga role-playing-game (RPG). Usually, Morgan is our game master (GM) but a couple of months ago, Morgan offered all the other players a chance to run an adventure. Because our RPG is in a super-hero universe and my daughter creates comic book covers to commemorate each adventure we have, this temporary change was nicknamed "Assistant Editor's Month", as a nod to this practice in comic book series.

My husband is often a GM in other games and is very comfortable taking this role. For me, becoming the GM was a challenge. Way back in 2004, I tried to create a role-playing game club at my school, using Dream Park; it didn't go well because I had no experience running a RPG. Back then, I had no clue what to do and the students didn't either. I am usually one of the player characters (PCs) and so all I have to worry about is how to handle the situations that arise during game play. As a GM, I'd have to create a scenario, prepare statistics for the villains or adversaries the PCs would face, but also be flexible for whatever the PCs might do. I talked extensively with my husband for tips on being a good GM - he had plenty of advice. I tried to find something similar to his tips online and found this post; it goes into a lot of extra detail that people who have not played RPGs a lot may find overwhelming. There's also this post - once again, if you focus on the subheadings, you can get a sense of the kinds of advice hubby provided. (There's even a whole book devoted to the topic, but I didn't have the time or inclination to pursue it.)

Experienced GMs don't necessarily have to do a lot of planning in advance, but since this was my first time, I wanted to be prepared. In our super-hero RPG universe, we had two separate but connected story lines occurring, because one of the PCs did something less-than-heroic and was sent to prison for her actions. (The other players created and portrayed incarcerated super-villains in this second game.) I decided to run an adventure for this game, rather than the main story line, because I thought that with the specific setting (a maximum security prison), it would help me narrow down my plot and villain options.

I'm guessing that many new GMs rely heavily on ideas from other media texts. I know I did. I was especially inspired by the book Dead Man's Switch by Sigmund Brouwer, the Hunger Games book series, as well as the story in the news about the American dentist shooting Cecil the Lion while on safari. I wanted to set up a scenario where the main characters were being hunted by outsiders who paid for the fun privilege, like in Brouwer's novel. As I outlined what I had planned, my husband asked some questions that at first sounded like he was a kill-joy but in the end was important to setting up the situation.
"Why would the characters want to participate in this?", he asked.
"Well, they could be promised some prize, like early parole, but it would be just a ruse."
"They won't go for it. They're suspicious and wouldn't want to help anyone with a 'special project'. You have to be prepared for them to say no."
He was right. When the lone superhero in the group was approached about being part of the research study, she refused. As the GM, I ended up drugging the PCs while they were in their prison cells and dropping them into the arena so they had to participate.

Another tool that I used, although with less success, was a maze map. I had seen my husband use maps in other games, but what I learned was that maps depend on the kind of RPG you're playing. In a traditional fantasy or dungeon crawl, like Dungeons and Dragons, it's important to have a sense of where the treasure is hidden and where the monsters are lurking. I used a very simple maze map, but our youngest player (my son) quickly became fed up with walking up and down corridors. That slowed down the game play because I stayed too faithful to the map. He got bored and left the game before we finished. 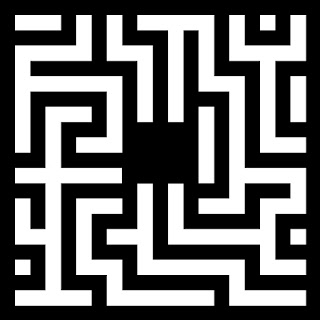 A snag that I hadn't considered was the details of the environment. When my antagonist (Sharpshooter) and her minions (Sporting Chance and Fighting Chance) were acting as snipers in fake trees in the hunting arena, one of the characters decided to topple the trees. I hadn't considered that move, so I had to arrange things so that it was difficult but not impossible to tear down the trees. (They bent but did not break.)

I asked my daughter what the high and low points of that game were. She said she liked the character interaction - our regular GM played a leprechaun hybrid who was obsessed with finding treasure and no one wanted to follow the menacing immortal alien who speaks rarely but they ended up together anyway.

Good GMs make RPGs look easy. I know that it takes a lot of practice and experience to make a RPG enjoyable. I liked having the opportunity to try the other side and it gave me new appreciation for all the nuances and considerations that a GM must remember while playing. Our next game with our friends will be Annual #3 on January 10, 2016 and I'm looking forward to what might happen.
Posted by MZMollyTL at 12:35 PM No comments:

I know this blog has become a version of my daughter's Deviant Art page just devoted to her comic covers of our RPG adventures, but that's okay! Here are Issues 25-28, and #28 hasn't even been delivered yet in its paper form to our wonderful audience. 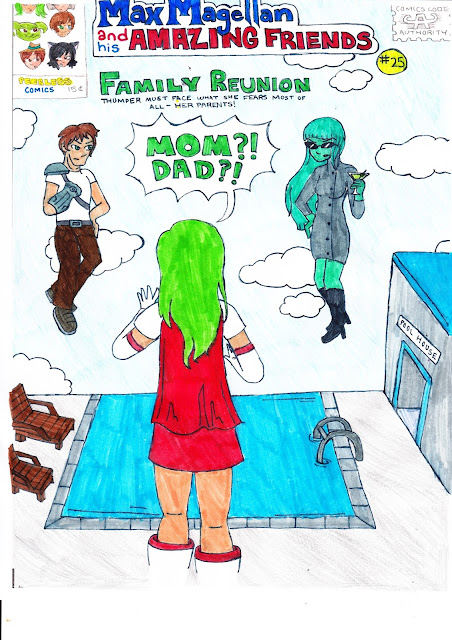 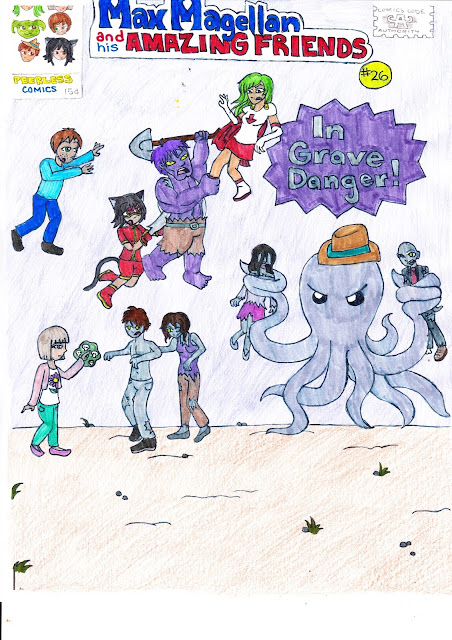 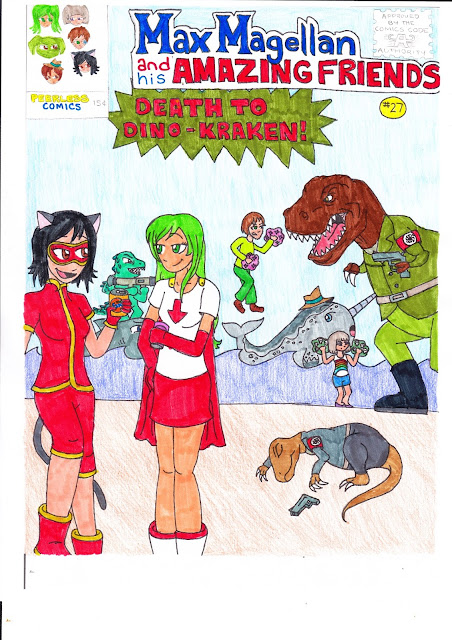 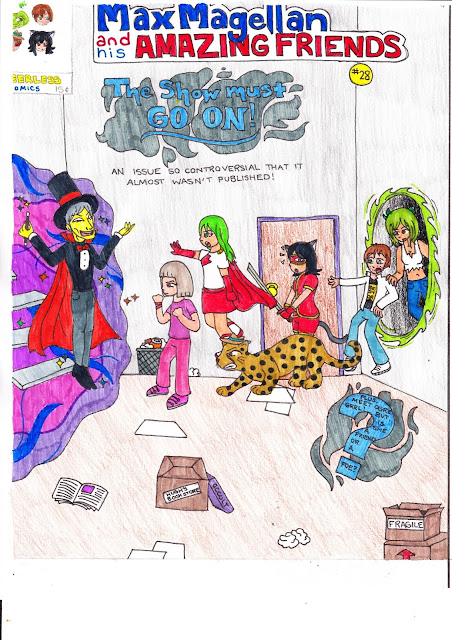 We are so excited about the upcoming adventures! Stay tuned!
Posted by MZMollyTL at 5:50 PM No comments: